Losing Money in the Stock Market? Here’s How You Can Earn it Back

If you invest in risk assets like stocks, you’re bound to face drawdowns. After all, they’re merely the price you pay in exchange for the chance of higher returns. But knowledge of this fact alone hardly makes big drawdowns any less discomfiting. So, how do you dig your way out?

Luckily, the market does most of the digging for you, most of the time. Market corrections — peak-to-trough declines of more than 10% but less than 20% — occur roughly once every year or two.

Even bear markets — peak-to-trough declines of 20% or more — are accompanied by reasonably quick bounce backs. On average, the S&P 500 fully recovers from its bear markets within 24 months.

It’s only when steep recessions crater the market that recovery periods become long and painful. However, even the worst of drawdowns don’t last forever.

The perils of large drawdowns

The first decade of the 21st century was not exactly a pleasant time for the U.S. stock market. The dot-com crash of 2000 to 2002 was followed in quick succession by the Global Financial Crisis, which roiled equity markets from 2007 to 2009. 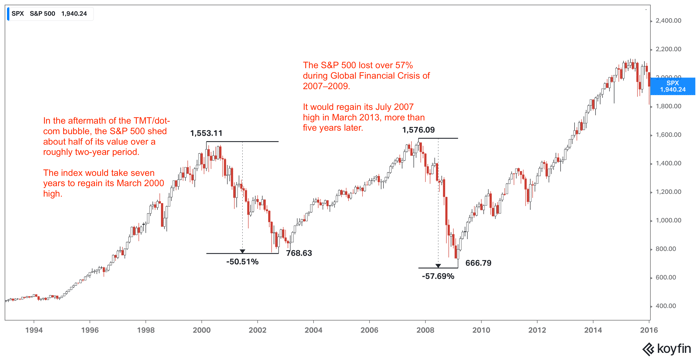 Investors who survived this “lost decade” — the 10-year period from 2000 to 2010 marked by zero returns — would find the era’s solemn lessons on the dangers of large, unmitigated drawdowns to be difficult to forget.

At the same time, the aughts became a reminder of the difficult and prolonged — but nonetheless far from impossible — recoveries that needed to follow to reach new all-time highs.

Specifically, as losses mount, it becomes more difficult to make your money back. For instance, while breaking even from a 10% loss requires an 11.1% gain, recovering from a 20% drawdown requires a…

Next Article Overview of Lithuanian Airports: Lithuanians do not save money on air travel

Top financial mistakes that may derail your investment journey

After saving money, you need to invest it properly to cover risks, save taxes and to generate fruitful returns. Unless you invest, the money saved […]

Cybercriminals are increasingly exploiting security flaws in smart contracts to steal cryptocurrency, according to the Federal Bureau of Investigation. In an it published on Monday […]

How to Start Investing in a Bear Market

The party in the financial markets is long over. Chatter about hot stocks and fabulous opportunities in cryptocurrencies and NFTs has died down to a […]